Skip to content
Meet Singles Near You Who Want Easy Sex with No Strings Attached. - Click Here
Nude Uncensored Profiles, Message Locals, Members Sharing Sex Stories, Swingers, Crazy Couples + More. Meet Beautiful Girls. Meet Single Women & Men. DM, Flirt, Send Gifts, and Meet For Sex.
I’m crazy for even sharing some of the information that I do, I know. Sometimes I get a bit too deep with these escort sites and classified ads. Well, today I’m sharing the ins and outs of a site called Bedpage. The site is essentially trying to replace Backpage.com. After checking this site out for a month, I finally feel confident enough to publish this review. Here’s what you need to know about the site. But first, if you’re simply looking to meet girls and have sex for free, then use this site here before anything else. 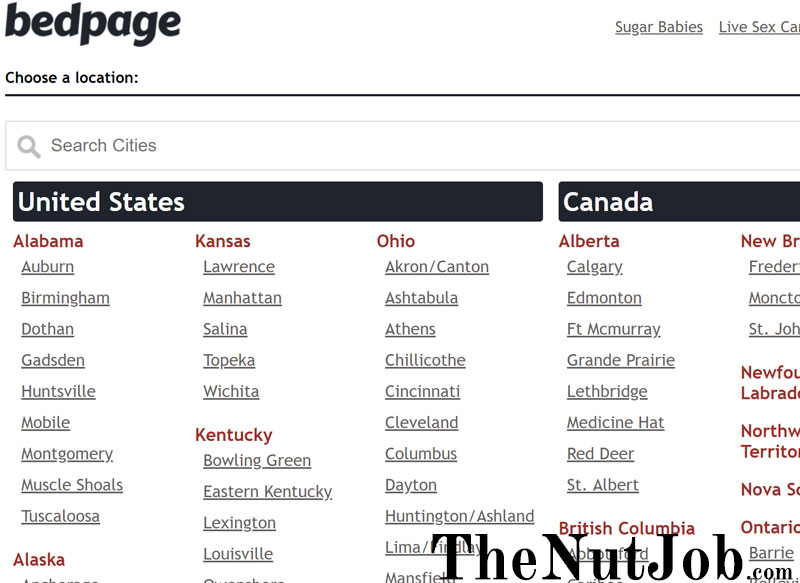 Before I begin my review, don’t go sending me hate on my dislike of prostitution. I don’t judge, you do what’s right for you, but I prefer to not pay for sex. That being said, I do always look at these escort sites with an open, but critical eye so you don’t get yourself in trouble, beat up, robbed, or sick from something that requires a strong antibiotic or can’t be cured.

So, what is Bedpage? If you’ve used any escort sites before, you’ve probably heard of Backpage. Backpage was a site that had personals ads, escort ads, and was kind of like Craigslist, but a little dirtier.

Backpage is gone because of a bill passed to prevent sex trafficking. FOSTA/SOSTA was passed around March of 2018 and has pretty much convinced all sites like Craigslist and Backpage to either remove the personals sections or completely close up shop. This doesn’t mean that escort sites don’t exist, they do, but they really leave much to be desired, in my opinion.

Enter Bedpage. Bedpage is a site that was created using a spiffy little name to try and make you think that it is a sexier version of Backpage. But, is it? If you’re at all curious about using Bedpage, read my review to find out if I would recommend it.

4 Reasons Why Bedpage is a Joke

I really took the time to look at everything Bedpage had to offer because I wanted to be completely sure about what it was and if it was a decent site or not. I didn’t have to poke around long to find out exactly what Bedpage was about and believe me, it is exactly what I suspected. Here are the reasons I found that Bedpage.com is a complete waste of time.

When you land on the Bedpage homepage, you’re going to see that is an exact replica of the Backpage homepage before they were seized by the government. However, don’t let this fool you, it is not Backpage and has absolutely nothing to do with Backpage.

Remember, Backpage was just like Craigslist in that it offered up ads that weren’t sex-related. Bedpage has those same categories listed, but if you check any of them, you’ll see there are no ads posted. Bedpage is nothing but a method of advertising dating sites and fake escort ads.

This site likes to post ads. Like, everywhere you look, there are ads. Not all those ads are bad, mind you, they’ve got some ads of dating and hookup sites that are actually very good for getting laid.

However, if you’re planning on using Bedpage for finding an escort, you’re probably going to be disappointed. The number of true escort ads is very slim, which I’ll get to in a second, and the number of dating site ads is almost overwhelming.

If you do want to use Bedpage to find a dating site, you want to be careful there as well. Yes, some of the sites they advertise are very good, but many are also fraud sites themselves. Really, you have got to be careful when using Bedpage.

When you do stumble across an escort ad, you’re going to notice that they are all usually very sexy women. I’m not saying sexy women aren’t working as escorts, I’m sure there are very fine women in the world’s oldest profession. What I question is the fact that every single escort is gorgeous.

When I see something like that, I get on my detective hat and start doing a little more investigation in the form of a reverse image search on Google. What I found is exactly what I suspected.

Every picture I took the time to search was, in fact, stolen. See, when dating site creators make a site, they will look for hotties who have posted on other sites and they “scrape” them, or in layman’s terms, steal them, to use on their site. The original person who posted their photo elsewhere has no idea their image is being used to promote Bedpage and I’m pretty sure they wouldn’t be happy about it.

What does all this mean to you? Well, what it means is this: if you find a sexy escort and you contact her wanting an hour or so of her time, the picture you were so enthralled with is likely not the woman who will show up on your doorstep. Maybe that doesn’t bother you but think about it.

Let’s say you find a cute blonde, you order her up, and you get a knock on your door. You open the door and the woman who showed up is not the woman you thought would show up and even worse, she isn’t doing it for you. Like, she’s giving you whiskey dick (speaking of whiskey, here are some cocktails to try) because she’s a two-bagger.

Now, what do you do? You’ve got an angry prostitute in your house who won’t leave until she’s paid, and you certainly don’t want to have sex with her, and you don’t want to pay for something you didn’t do. Do you call the police? How in the hell can you without admitting you were looking to illegally hire a prostitute?

So, I guess what I’m saying is please, PLEASE be careful if you decide to use Bedpage. You really have no legal leg to stand on if things go awry.

#4. I’m Not the Only One Who Thinks Bedpage is a Fraud.

After everything I’ve said, you might think I’m being a wimp, being dramatic, or just totally against using paid sex workers, and all of that is fair. But, I want you to know that I’m not the only one who finds Bedpage to be a fraud site. If you don’t trust me, trust the experiences of others who have used the site.

Ripoffreport.com is a great resource to use when you’re considering any type of dating site, whether it is a mainstream site, a more adult type of dating site, or an escort site. If you look at the report on Bedpage, you’re going to see that others have tried it and have been ripped off. And, if you don’t trust me, and you don’t trust them, then nothing I say is going to convince you.

I don’t like sites that make their money from ripping off unsuspecting people and unfortunately, Bedpage is one of those sites. The whole escort/prostitution thing aside, people are using Bedpage to satisfy something in themselves and the site creators are playing off that need, which is pretty awful in my book.

If you must find yourself a sex worker, I promise you, Bedpage is not the place to do it. You’re really better off joining a hookup site and finding someone interested in a mutually legal sexual relationship, but again, you do what’s right for you. Just don’t do it on Bedpage, k?

Looking for other sites that are similar to Bedpage.com? No problem, I’ve got you covered with every site that’s almost identical to Bedpage. Rather than share all of them, I’ll give you the most popular sites based on visitors.