There are usually two camps on the topic of paying for sex. The first group believes that paying for sex is ridiculous, along with illegal (which it is), and would never consider an exchange of money for sex. The second group doesn’t see a problem with paying an escort, prostitute, or streetwalker, even if it is illegal to do so in most of the United States.

I am going to preface this review by saying I am not a fan of paying for sex. I’ve had enough success on hookup apps and dating sites that I’ve never had much of a drought in the bedroom. I also do not really want to get arrested, get a disease, or even possibly beat up by an angry pimp or prostitute who only wanted to rip me off. To me, hiring a sex worker is just too risky.

However, I do know that men will be men and no matter what I say, there are going to be those guys that want to pay for sex. If that’s you, then you might be interested in a site called Escort Cafe. Escort Cafe is a supposed escort and massage parlor listing site to help those who are interested in paid sexual acts to find them locally. 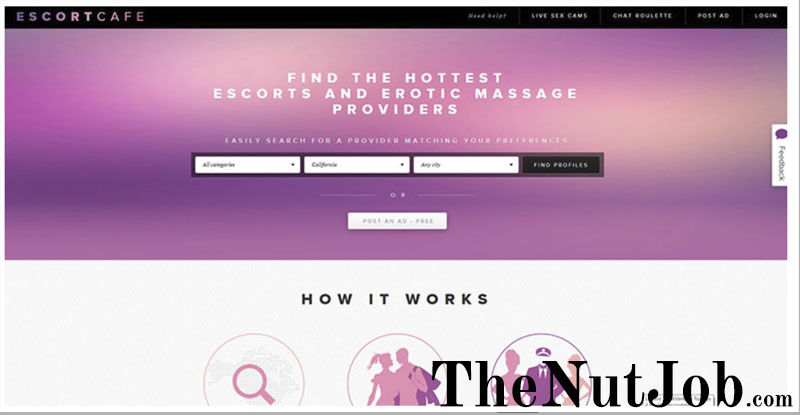 Well, I decided to review Escort Café to see if it was worth your time, even though, full disclosure, I had no intention of actually using the service to find an escort. I remained open-minded, though, and looked at this escort site the same way I would look at any other dating site to see if they pull the same things the sham sites use. Here is why I think the site isn’t all it claims to be.

Looks Can Be Deceiving

When you land on Escort Cafe’s webpage, you’re going to see that it looks pretty schmancy. Escort Café wants you to believe that their search fields are so advanced that you’ll instantly be matched with an escort that is just going to blow your, ahem, mind.

The truth is, when you put in your search parameters, you’re not going to find much. In fact, unless you are in a big city, you’re probably not going to have many options at all. I mean, there will be some results because they want you to keep using their site, but the profiles on Escort Café leave much to be desired.

Escort profiles on Escort Café are so basic, it’s almost laughable. When you choose a woman that might be of interest to you for an hour or so of fun, you can read a little, and I mean very little, about her. There are a few basic sentences on her ethnicity, age, hair color, height, and measurements and that’s about it.

Some of the escorts have reviews on their services, but if you’re an eagle-eye like me, you’ll see that the reviews weren’t even written on Escort Café. Instead, these reviews were taken from other escort sites and reposted as if they were from E.C. members.

Oh, and let me assure you, the site does not verify their escorts in any way. Why does that matter? Well, don’t you want to be sure that the escort you’re contacting isn’t a police officer?

Escort sites that don’t verify their members can’t guarantee that the woman who uploaded pictures is the actual woman behind those pictures, so you’re also running the risk of a completely different person showing up to satisfy you. Think about it, it could be a guy that’s going to beat you up or rob you. Is that a risk you want to take?

You will also notice that Escort Cafe has multiple links to things such as Chat Roulette and Live Sex Cams. I don’t know about you, but I am not one to use a dating site to sit and watch dirty cam shows. I mean, I joined to actually get laid, you know?

The bigger problem with these links is that they’re external links, meaning that when you click on one, you’re going to be taken away from Escort Cafe. This shows that the website is nothing but a money-making scheme to get you to check out other sites and then Escort Cafe gets paid for advertising to you.

The privacy policy is something that nobody reads when they join a site and it’s a shame because it can really be eye-opening.

The Escort Café privacy policy lets you know that you pretty much have no privacy in using their site. They can and will give you up to law enforcement if asked to do so. Remember how getting with an escort is illegal in most of the country?

Once you become a member, you’re also giving the site the right to send you promotional information as much as they wish. I sure hope you’re ready to have your inbox blown up with junk because that is what Escort Cafe is dishing up.

Oh, and if you ever have any trouble while using Escort Café, good luck getting in contact with customer service. You cannot find a number to call or anyone to email, but instead, you’re supposed to fill out a generic help ticket. Trust me, they’re not going to get back to you on any issues.

Final Thoughts: Stay The F Away!

I’ve tried out all kinds of dating sites (see the top ones here). I’ve tried the mainstream ones, the kind of “out there” ones. I’ve even tried out the ones I despise, the escort sites.

If I have to be honest, I’ve been on escort sites that I was sure were legit. They are out there. But, I’ve never been more sure of something in my life and it is this: Escort Café is nothing but a waste of time.

The privacy policy is a joke, the escort profiles are super basic, the links are external in nature, and there is absolutely no privacy or customer support.

If you are looking for sex, I would highly recommend avoiding any escort site for legal reasons. But, if you’re intent on using escort sites, I have to be adamant that this is not going to help you get lucky. Nor is the infamous Listcrawler.com site either. Face the facts bro.