I love getting massages and I do get them quite frequently, just not based on the recommendations of Rubmaps.com. For the most part, on thenutjob.com, I’m reviewing adult and casual dating sites with the occasional escort site thrown in for good measure. However, RubMaps is a new one for me and I was very interested to see what this supposedly, “Yelp for massage parlors” was in fact all about. If you’re like me, you don’t always trust the first thing you find out about a site, instead, you want someone to check things out and get deeper, especially when it involves something that could get me in trouble.

Rubmaps.com – Complete Rundown Of The Site

If you don’t know what can go on in any of the Asian massage parlors, you’re just too pure for me. For the rest of the world, you know that many of these types of businesses offer something called a “Happy Ending,” hence the name RubMaps. If you are someone that likes a hand job along with your sensual massage, you might be tempted to see what parlors are recommended. If so, you want to know how well the ladies work their magic, as well as those that are less than ideal. However, RubMaps really fails in that regard for a glaring reason, which hit me as soon as I tried to access the site…

RubMaps has been in operation since 2010, but because of new sex trafficking laws enacted, they have to say that they don’t condone any type of pay for sex services to cover their own butts legally. But they’re a site that caters to men who enjoy paid hand jobs. Seems strange to me, but ok, I understand they don’t want busted. So I clicked that I agree to this just to gain access, and what I found in the Terms of Service were just as ridiculous.

The terms that are listed, if you bother to read them, which I totally recommend you do on any site, state that you cannot use their site for any sexual purposes. That means no exchanging of money for sexual purposes, no offering any adult services, and nothing that enhances the experience of sex.

You also can’t donate or purchase any sperm/eggs, buy or sell guns, or do any nude modeling. This is all well and good, but the site lists reviews of massage parlors that allow happy endings and what it will cost you. So essentially, they are going against their own terms of service. Red flag, anyone?

You Must Pay For It

If this doesn’t bother you, you’re much braver than I am, and you’re going to have to pay to read any of the reviews. A standard membership costs $19.95 a month, but they also offer a yearly membership at $149 if you pay by debit card. FYI, this costs WAY MORE than the best dating site I use, which doesn’t require you to pay for sex… If you want to pay by prepaid cards or bitcoin, the membership costs are increased.

Paying allows you access to the reviews but doesn’t provide you with any safety net. That’s right, if you’re caught and charged, that’s on you. If you have any issues with the parlors, you’re just basically screwed. RubMaps doesn’t stand behind you whatsoever. And once you’re a paid member, you’re in their database as a person who has paid for sexual favors. Do you really want to make it that easy for the police to arrest you for dabbling in illegal activities?

Most Parlors Are Closed

You will also find a section that will list any massage parlors that are closed. Do you know why they’re closed? They’ve been raided. These raids happen all the time and if you’re on site getting a rubdown when they’re raided, you’re getting arrested along with all the girls who work there. Places like these are also known to have hidden cameras, so if you’re not there when they’ve been raided, you’re on file in their system and on tape getting an illegal rub and tug.

Real Legitimate Businesses Suffer From This

Proof They Use This For Sting Operations

Some people need proof that sites simply cannot be trusted. Well, Rubmaps.com was recently named in a police report written by the Jupiter, FL Police Department. I’ve provided a screenshot of the document for all to see.

This is the report from the recent bust that took place at Orchids of Asia Day Spa, where Robert Kraft, John Childs, and 25 others were arrested for solicitation at the Spa. If you want the entire report, you can find the URL below. It’s been sourced, just copy and paste it into your browser to read the entire report.

Still not convinced that this is a bad idea?

Trust me, they use Rubmaps.com to conduct police raids and stings on these massage parlors. The sting location was at: 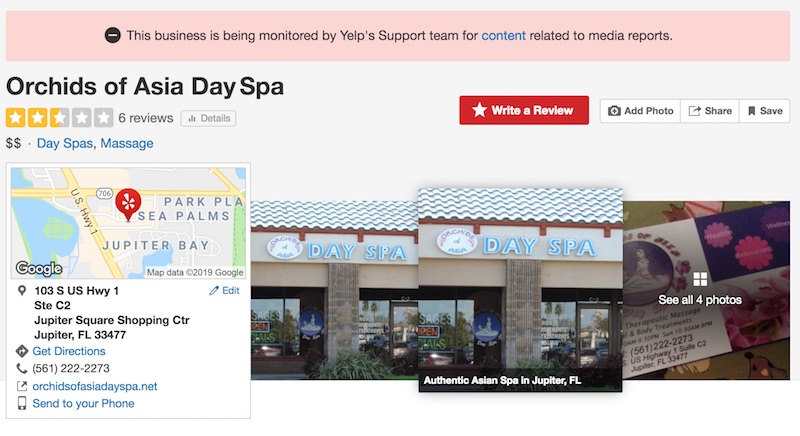 Don’t believe me the New England Patriots owner, Robert Kraft, got in trouble…

Here’s a video of him getting charged:

Yes, the costs for a full service massage was about $80 (cheap, huh). Here’s proof:

One very important thing you must keep in mind here is that there are other spas which the Orchids of Asia Day Spas phone number is connected to. Be VERY careful if you’re going in for a rub and tug these days.

You’re better off just meeting someone online to meet for a night of hooking up instead.

Conclusion: RubMaps Isn’t Worth The Hassle

There are plenty of alternatives out there where you don’t need to pay for sex. It’s all about the networking and action that you take. My advice would be to give one of these listed below a shot. There are no extreme costs involved like there are with these massage parlors on rubmaps.com and other escorting service sites.