Backpage, in its time, was probably one of the top sites for finding sex in whatever form you enjoyed. Unfortunately for those folks who enjoyed casual sex, and the occasional paid sexual encounter, Backpage was seized and taken down by the Feds after the passing of SESTA-FOSTA in March of 2018.

If you don’t know what SESTA-FOSTA is, let me give you a little rundown. SESTA-FOSTA is legislation that was passed under President Trump to stop sex trafficking and to avoid being hit with fines and such, sites like Craigslist decided to stop offering up a personals section because let’s face it, there was a lot of sex going on there. And don’t get me wrong, I was bummed when it was shut down, I used it for consensual sex many a’times. That’s waaaaaaay back in the day when things were safer and more dating-related versus hooker related. 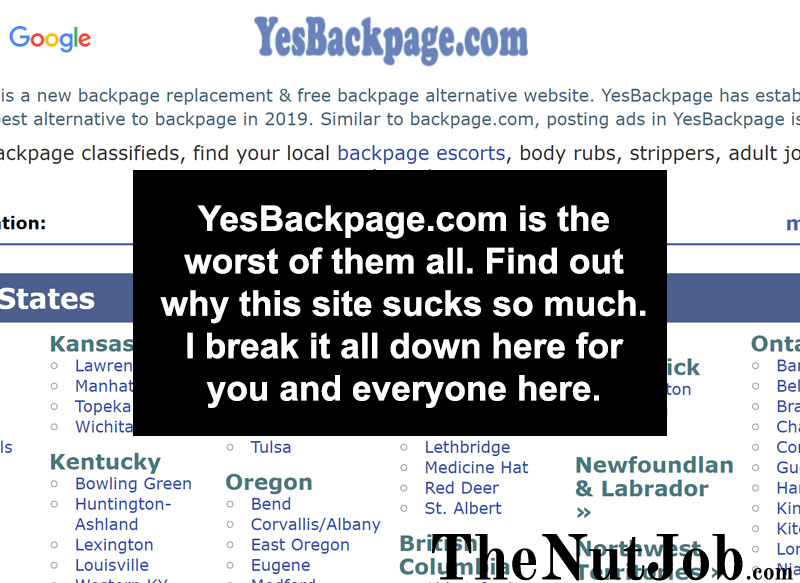 Backpage is another story, though. Three women filed a complaint that the classified ad site was allowing for online child sex trafficking to occur and the FBI swooped in and shut the site down without explanation. I won’t say I’m upset by this one, especially if the accusations are correct and true. But, as they say, everyone is presumed innocent until proven guilty, I guess.

Now, just because sites like Backpage and Craigslist have stopped their sex ads doesn’t mean that there aren’t other sites out there trying to fill in the void these sites have left behind. And many men are drawn to the copycat sites, especially when they have names so similar to the sites they’re pretending to be.

One of these sites is YesBackpage.com. YesBackpage.com wants you to believe that they are the answer to your casual dating prayers, but are they? Or, are you going to be left feeling less than fulfilled in all ways?

If you’re tempted to check out YesBackpage.com, read my review first. I promise you you’ll find this review eye-opening. Is yesbackpage legit? IMO…NO!

Why I Don’t Trust YesBackpage

YesBackpage.com looks pretty innocent when you first look at it. In fact, it looks pretty legit. This is why it tricks people; it just looks too good. Trust me, once you delve deeper, you’ll see exactly why YesBackpage.com isn’t what it appears to be.

Here are the reasons why I think YesBackpage.com is untrustworthy and only going to lead you to disappointment:

If you’ve looked at YesBackpage.com and you’re interested in responding to some ads, the first thing you’re going to have to do is create an account and purchase credits. There is the first red flag, the credits. Credits are usually a clue that you’re on a site that isn’t great and is only looking to make money off of you by making you pay by the message through credits.

The second huge warning sign is that the classified ad site doesn’t have ads for anything but sex. Now, I know that might not seem like a huge thing, and actually appears to be a good thing, but trust me, it isn’t. Even Backpage had classified ads for other things, like jobs, furniture, and cars.

What I did find was ad after ad after ad that looked super similar. The escort services and the people supposedly looking for a date or hookup looked almost identical. Do you know what that tells me?

It tells me that none of those ads are for people looking to get together for free. If you respond to any ad, with those expensive credits you’re forced to buy, you’re going to be paying again for sex.

Now, I don’t know where you live, but in most of the U.S., paying for sex is still considered illegal. I don’t know why anyone would pay for sex, especially with so many dating sites and apps out there that you can use, affordably, to find women who want to get together without you having to pay them by the hour and run the risk of some pretty bad things happening to you.

If you think that you won’t get caught using an escort or prostitute site, you’re totally wrong. Look at what happened to Backpage. It could happen to any other site out there and with YesBackpage.com, you’re putting your personal information into the site. You’re just making it super easy for the Feds to find you and possibly ruin your life.

That doesn’t even take into consideration the other things that can happen, like Sexually transmitted infections and diseases, getting robbed, beat up, all that kind of thing.

#2: Cryptocurrency is the Payment of Choice on Yes Back Page

Do you use cryptocurrency? I’m not into that and wouldn’t even know how to go about getting it, so if you’re like me, you either have to figure it out or you have to use a gift card or Western Union to pay for those dang credits to use YesBackpage.com. If that doesn’t scream “shady AF”, I don’t know what does.

Oh, and if you don’t much care about using alternative payment options, there are many reviews from people online who got seriously ripped off using gift cards as payment. Apparently, if YesBackpage.com wants to drain your cards, they can, and you can’t do much about it. Customer service is nonexistent, and you really have no recourse for getting that money back.

Look, you don’t know me. Maybe you think I have a hatred of using escort sites or I’m just a generally bitter guy. And while those two things might be true, there are many others who have used YesBackpage.com and have had terrible experiences.

If you don’t believe me, just give old Google a workout and see what others are saying about YesBackpage.com. Nobody that is real is saying anything positive about it and many people have been ripped off big time.

YesBackpage.com is not worth your time or your cryptocurrency. The only thing that you might get is something that requires a prescription to cure or the need for a very good lawyer to get you out of trouble.

If I were you, I would totally and completely avoid YesBackpage.com. I’d also plan on avoiding sites or any kind that use the work Backpage in them.

Other sites to avoid: