Skip to content
Meet Singles Near You Who Want Easy Sex with No Strings Attached. - Click Here
Nude Uncensored Profiles, Message Locals, Members Sharing Sex Stories, Swingers, Crazy Couples + More. Meet Beautiful Girls. Meet Single Women & Men. DM, Flirt, Send Gifts, and Meet For Sex.
Bottomline Upfront: This report covers everything you need to know about the OneBackpage.com website. I’ve reviewed the site and reported on everything important. The truth is, you might not like what you have to hear. If you’re not looking to pay to play and you just wanna bang, then use this here instead.

Have you heard of the OneBackpage.com website? It’s one of the latest replicas that popped up recently after the original Backpage seizure. Anyone that uses adult hookups and other sex dating sites surely know that Backpage has been shut down. In fact, many of the sites like it are either shut down completely or like Craigslist, losing their personals ads.

This is because of legislation enacted to stop the possibility of sex trafficking, which is definitely an important thing. However, where does that leave the casual dater just looking for some quick action and none of the conversation mumbo-jumbo?

Well, it might leave you looking for some alternatives and unfortunately, there are many shady sites popping up all over the internet. One of these is a Backpage wannabe called Onebackpage.com. They are trying to market themselves as a great alternative that will fill the hole that Backpage left behind, but I’m here to tell you that isn’t the case at all. 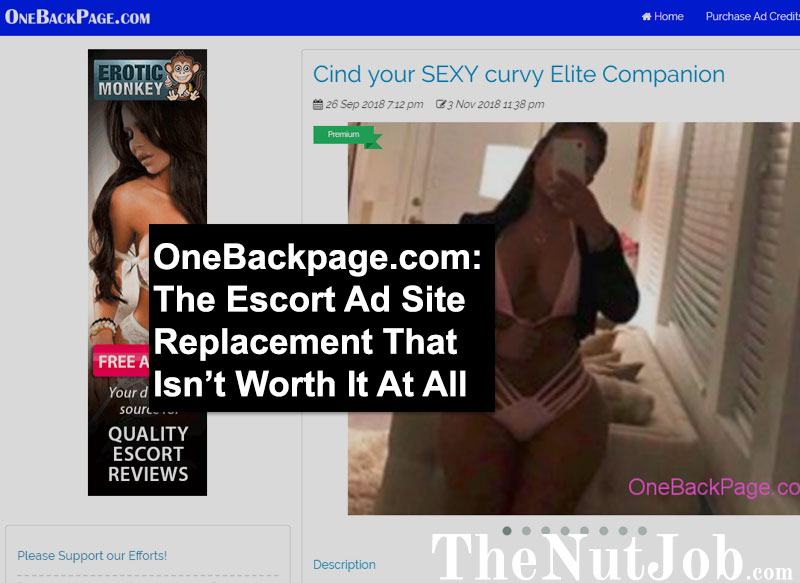 Backpage was notorious as a way to hire an escort for a few hours. That’s mostly why they were shut down and one of their co-founders is under investigation. Remember, everyone, hiring an escort is still pretty much illegal all over the United States.

I’m not talking about moral issues here, I’m just stating a known fact: you cannot legally hire a prostitute in 99.999% of this country. And being linked to a site that does just that, well that just seems like a really dumb idea to me. Onebackpage also commonly referred to as Onebedpage is trouble. Don’t forget that…

However, if you happen to read the terms of service on Onebackpage, you’ll see that they’re trying to say that they don’t allow any discussion of paying for sex, even in a coded fashion, on their site. Um, have they spent any time looking at their own site? There is nothing but talk of paid sex and most of it isn’t even coded! Onebackpage only writes this to cover themselves.

It won’t cover you at all should the feds come a’ knocking. And if you want to settle any legal issues against this site, be prepared to travel because their parent company isn’t in the US, it’s in Bosnia.

Something that irks me when I visit a dating site is the huge number of ads, banners, and pop-ups. A shady dating site will always have an abundance of these third-party advertisements in an attempt to get you to visit them and thus make money for the site you initially visited, such as Onebackpage.

I was instantly hit by a fake IM message from some girl and if I tried to get it to go away, I was led to another site, similar to Instabang.com but not effective, where supposedly a member wanted to trade pics with me. This just screams “scam.” None of these members looking to connect with you are real, no matter how cute and sexy they seem. Oh, and joining any of those other sites will cost you, so don’t think you’ll be getting anything for free.

Onebackpage likes to pretend that you can find other things on their site, I guess to try and make it seem more like Craigslist and less like a prostitution playground. So supposedly you can buy a car or some furniture or find a job, but trust me, the only thing you’ll find when you visit One Backpage is some sub-par muff.

The ads for women on Onebackpage all look like they’ve been ripped from other places. This is common practice for sites like this, they don’t have their own content, they bulk it up with stuff they’ve stolen from other places. The girls weren’t anything to write home about, just regular looking and in my opinion, not worth the money I’d be paying them for an hour or so of sex. If I’m going to be paying for it (which I would NEVER do), she better be better looking than average.

Conclusion: OneBackpage Is Illegal And Not Worth It

With unverified ads, you don’t know who will show up at your door or what they’ll be doing to you once they get there. For your own safety and well-being, I would highly suggest you find a female for sexy times anywhere but Onebackpage.com.

Where can you get laid for free? Well, try the free sites listed here before all others if you’re looking for something for nothing!

If you’ve enjoyed reading my review of Onebackpage.com, then I’ve got some others that you’re going to want to read as well. My advice is to check out this list of sites below and learn everything there is to know about them before using them.

THIS APP IS BETTER THAN HIRING GIRLS FOR SEX – TRY IT!