Are you waking up with your soldier saluting you? Is your junk ready to rock and roll upon first sight of daylight? If so, then you’re doing something right. We all recognize those days where we wake up with a massive boner and even more so those days that we’re able to put it to good use first thing. You guys using those “casual” dating apps know that morning wood comes in handy for those overnights that commonly occur after a hard night of partying.

At any rate, you might remember one or two of these fantastic erections, but are you keeping track of your daily boners? If not, then you might be in trouble!

Assuming that you’re not waking up with a stiff penis, then you might have some health problems much deeper than your penis has seen.

Don’t worry though, there’s an app for that! 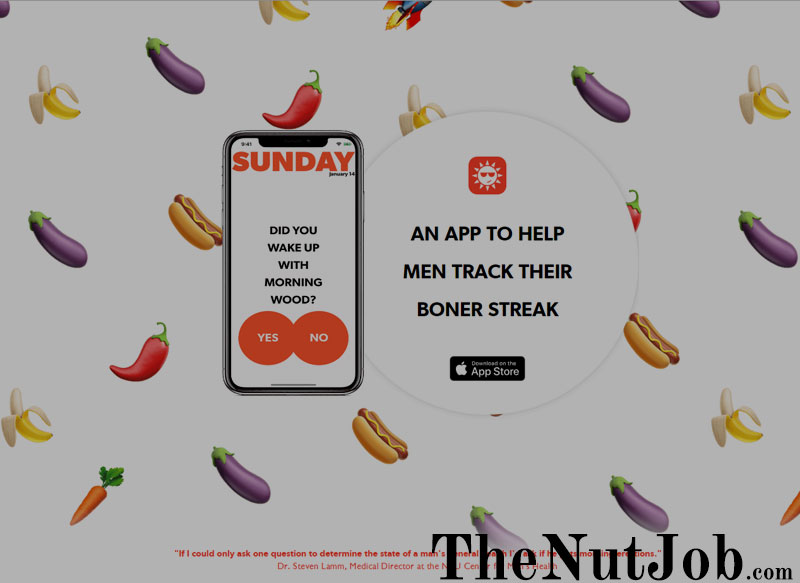 First off, for those that haven’t got a clue or are out in la la land, morning wood is a term used to reference waking up with an erection. Now that I got that out of the way for all the idiots, time to get down to business.

An app exists that allows you to track your morning erection activity. It was designed by two companies that I’m very familiar with and you likely are as well. One is a mega publication powerhouse Men’s Health and the other is a tech-based company solving erectile dysfunction problems for millions of Americans called, Roman.

Using the app is quite simple. I’ve provided instruction below for those that might need me to hold their hand throughout the process. I just realized how creepy and disgusting that sounded – my apologies.

Here’s how you use the Morning Glory app…

Step 3. Click the YES or NO button to indicate whether you woke up with a boner.

The app will then keep track of your boner streaks or if the lack of morning wood sightings. The app will also make suggestions based on your morning boner behavior.

This smartphone app sounds like something that an adult company or a cam site might create, but I promise that it can really come in handy – again, poor choice of words.

Well, according to Men’s Health, not having morning wood can actually be a sign of something much more serious (other than the obvious erectile dysfunction issue). It can be the sign of a blocked blood vessel, high blood pressure, heart disease, high cholesterol, and many other issues that men may be dealing with.

The folks over at Get Roman provided a video on the topic which I’ve shared with you below.

Now, what should you do if you are consistently waking up with zero wood and limp dick? Well, perhaps you should think about getting things checked out just to play it safe. There’s nothing worse than having a dick that doesn’t function. Well, I guess dying or having something major medically wrong is worse, but let’s face it, your manhood standing up straight is as important as it gets if you’re active on the dating scene today. Of course, if you’re paying for it, then it doesn’t much matter I guess – but your health still does!

While I don’t typically like to talk about things related to penis health, I know how important it is and that’s why I’ll be covering a heck of a lot more related topics in days to come.

Download the app and start tracking your morning wood. Do it now before something more serious happens to you.

Cheers to good hard on health.