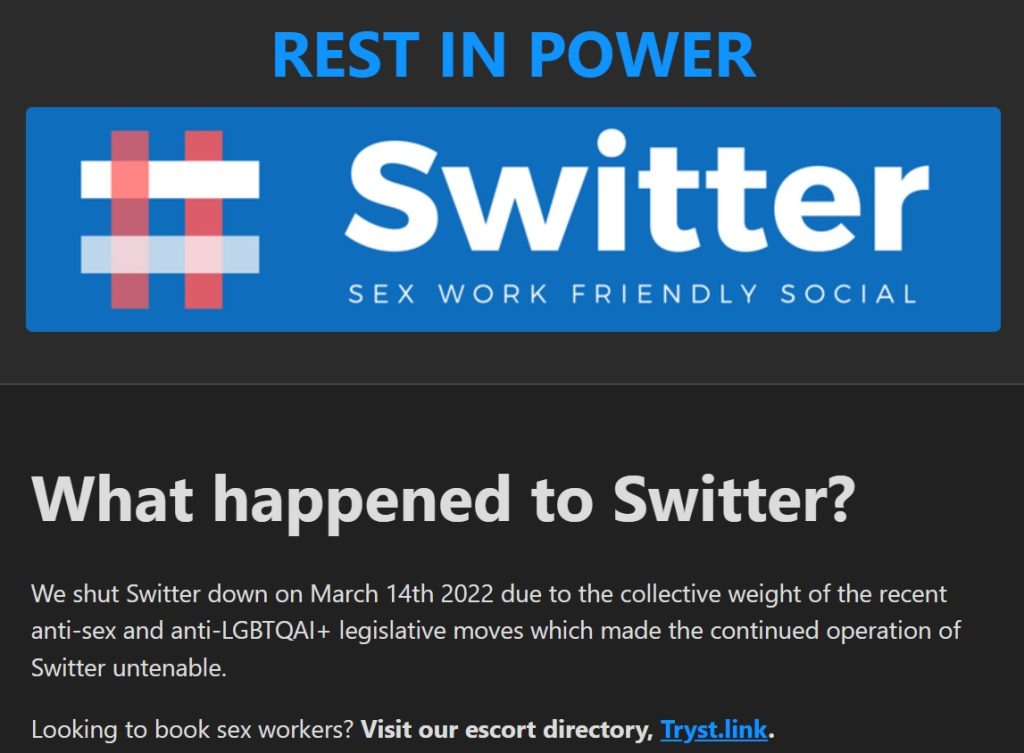 Like most other internet businesses, Twitter abides under the 2017 Stop Enabling Sex Traffickers Act. Because of this law, it is now very difficult to locate a sex worker, or even seductive internet live shows.

This law is responsible for the demise of Backpage (i.e., San Diego Backpage) and the drying up of the personal area on Craigslist.

There are, of course, phony counterparts to Backpage, like Bedpage.com and others, that act the scoundrel and take advantage of people, but that’s another story.

Introduction to the Mainstream Social Media

We all know that pimps are bad for everyone involved, so it’s no surprise that sex workers have resorted to Twitter to promote and get employment without the assistance of a pimp.

However, things have changed since the online sex trafficking act was passed, and Twitter will now permanently ban any user they believe is exploiting the platform for sexual purposes.

Switter is a place where individuals who like and appreciate all things sexual can meet and chat in a secure environment.

To find out why it was believed that Switter is a terrific alternative for individuals on the margins of the sex industry who are searching for a place to turn, read this review if you are the sort of person who appreciates sex workers or if you have been banned from Twitter for being too vulgar.

In reaction to the shadow banning and deplatforming experienced by sex workers on networks like Twitter and Instagram, a small team of technologists and sex workers in Melbourne, Australia, founded Switter, a sex work-friendly social network, on March 18, 2018.

Switter was built on Mastodon, an open-source social media platform, and rapidly gained popularity as an accessible alternative to the mainstream social media site that was enforcing harsh, counterproductive, and restrictive content moderation policies in reaction to moral panic.

13,000 users were recorded in the first week, and by the end of the first month, it reached about 56,000 employees, customers, and allies using the site.

How Does Switter Work?

Switter.at operates in the same manner as Twitter. To share your thoughts with the rest of Switter.at’s users, just construct a “sweet” of 480 characters, add any necessary photos, tags, and content warnings, and send it on its way. Similar to Twitter, other users may react to or “re-sweet” your message.

Since the website is free and there is no restriction associated with using it, you may freely discuss any topic you choose.

However, this does not give anybody the right to discuss topics such as pedophilia, sex for money, or bestiality.

If you want to join and start posting, you have to agree to abide by their Code of Conduct, which is legal.

The iOS and Android apps allow you to keep the good times rolling no matter where you are because, let’s face it: everyone these days has a phone.

The Switter home widget is simple and intuitive to use. After logging in, you will have access to the following features and content:

It has a community timeline feature that allows users to post updates and share content with each other. The community timeline is a great way to stay up-to-date with what’s going on with other users and to find new and interesting content.

Public posts may include your preference for sex workers like Lola hunt, boyfriend experiences, and other sexual preferences.

Modify Your settings and Preferences

Switter is a social networking site that allows you to share sex thoughts and experiences with other users. You can also follow other users and see their updates in your feed. Switter also has a number of features and settings that you can use to customize your experience.

In this blog post, we’ll look at some of the features and settings you can use to do Switter work for you.

Switter.at, contrary to common misconception, is not just a toned-down version of Twitter. Users may also take advantage of the platform’s other interesting and novel features in addition to those already stated. Here are a few examples:

Use this official third-party service to keep in touch with your fans and followers on social media.

You’ll need to import the necessary data if you want to send media files to other Switters. You may subscribe to user alerts to find out who liked, shared, re-sweetened, favorited, etc., your posts, messages, re-sweetens, favorites, etc.

The ability to choose one’s own hues for a more individualistic feel. A 2MB JPEG, GIF, or PNG image may be uploaded to serve as your avatar, giving your account a more personalized feel.

Create a header to introduce yourself in as little as 160 characters. You may put up a barrier to prevent talking to someone in the group who has been annoying you in the past.

Ads similar to those posted on the classifieds website Craigslist. If you want to be absolutely certain that no one else can access your account except you, then you should use two-factor authentication.

Switter is dedicated to ensuring that its platform is secure and user-friendly. I do not advocate for the employment of sex workers, however. Because there are already plenty of legal sex-oriented applications available, there’s really no need to.

The Purpose of Creation of Switter

The internet, and specifically social media sites like Facebook, Twitter, and Instagram, have made it possible for sex workers to screen customers, build communities, pool resources, and organize in ways that make their jobs safer.

During COVID-19, in particular, this allowed certain employees the freedom to transition to or supplement their employment with activities performed remotely.

Cloudflare notably removed Switter from their service in those early days without sending us an email but continuing to shield white nationalists and other hate organizations.

Increased Numbers of Sex Workers and Boost in the Sex Industry

Switter rapidly gained popularity and safety as a haven for sex workers all around the globe. Unintended negative repercussions for employees in the internet world have arisen with the adoption of US bundled legislation FOSTA/SESTA, the seizure of prominent ad site Backpage.com, and the political and economic uncertainty felt in the subsequent years.

Switter was one of the online platforms where moderators really thought about how their choices might affect sex workers rather than seeing them as a disposable user group. The website was created for the members to stay safe during the pandemic while looking for potential clients.

The Reasons Behind Switter Shut Down

Since 2018, there has been a rise in the development and adoption of regressive and harmful anti-sex and anti-LGBTQIA+ policies and laws all across the globe.

The Australian Online Safety Act, the EARNIT ACT, and the UK Online Safety Bill are all examples of unclear, conflicting, and loosely written legislation that is promoted to prevent violence against women and children but relies on monitoring and control.

Assembly Four was forced to ban Switter in March of 2022 despite their best efforts, in collaboration with human rights organizations, to make policymakers and lawmakers aware that there would be a dead count associated with their poorly conceived decisions.

The complete statement on the shutdown from Assembly Four is available and highly recommended to read.

When popular websites like Backpage and Craigslist banned sexually explicit advertisements, many sexual outliers (especially males) were understandably unhappy. They use the social media platform Twitter to look for a replacement.

Twitter wasn’t the solution for me, or anybody else who appreciates sex, they discovered after using it for a time.

Twitter attempted to fill the hole left by Craigslist and Backpage and adopted the familiar social media framework. I wouldn’t recommend Switter if you’re looking for a place to meet people who share your sexual orientation.