Sometimes I beat around the bush. Today I’m not going to do that. I’ve covered some details and I’ve got intel regarding one of the escort sites out there today called Adultlook.com. I am sharing everything I know about it to help you make better decisions. Here’s what I’ve got to say about all this. 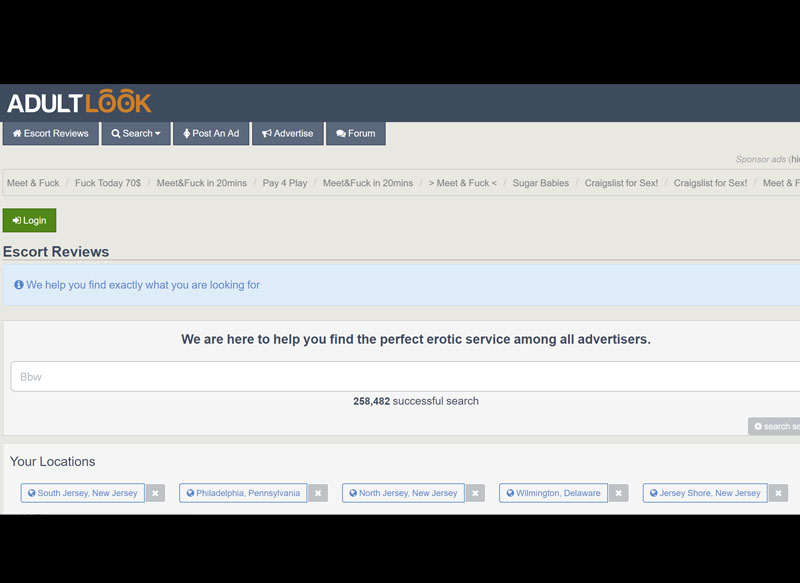 My Official Review of AdultLook

I’m NOT the kind of guy that enjoys spending my money and wasting my time with paid sex workers of any type. I don’t really judge anyone that feels they need to take part in this activity, that’s your business, but for me, I would rather find a no-strings-attached, free date on a legit hookup site.

Just to get this out of the way before I start my review, I have to make sure I mention that using paid sex workers, no matter what you call them, is pretty much still illegal here in the good old USA. I know you can go to that famous ranch out in Nevada, but otherwise, you still cannot pay someone to have sex with you.

Even if it wasn’t illegal, remember that sex work isn’t regulated and you seriously run the risk of getting a disease, having a totally different person show up than you “ordered,” and even being beaten up and robbed.

If none of that scares you even a little, you’re a stronger man than I. And, if you’re still considering the idea of getting an adult massage or spending an hour with a prostitute, you might be considering the site Adultlook. This site is supposedly going to connect sex workers with the men who appreciate them, but does it really achieve its purpose?

Well, my friends, I took some time to poke around on Adultlook to see if it was really going deliver on what it promised, or if those guys looking for a good time were going to be disappointed. If you’re interested in what I found, keep reading to find out if using this site will get you laid, or give you a massive headache.

When I first landed on Adultlook, I was underwhelmed. I guess they’re trying for a Craigslist kind of feel but even Craigslist is more exciting to look at. But, I guess you’re really not looking at the design of a website when you’re looking to hire a sex worker.

You’re also going to notice a big box of legal jargon you have to agree to continue to use the site. Basically, they want to make sure you’re of legal age, you understand that the site is for entertainment purposes and that the reviews left for the sex workers were for companionship only.

Ok, sure. I guess that’s what we’re calling it now, “companionship”.

Here is another disclaimer: I am from the United States so I can only say what I found for my area. Adultlook offers up its services worldwide and what you experience in your area may vary from what I found in mine. What I will say is if you’re looking to hire an escort, you’re probably going to have much more success in larger cities (like NYC, Miami and Fort Lauderdale) than small towns. That’s really the nature of all dating sites, so that’s no surprise, so if you’re going to be looking, expand your search range.

Once I agreed to the weak terms and conditions, I decided to see what I could find in a medium-sized city. I know not everyone lives in New York or Miami, but you might be from a city more Pittsburgh-sized.

Now, for a site that claims to have almost 40,000 registered profiles, it was kind of disappointing to see only 66 female escorts, 8 transsexual escorts, and one guy in Pittsburgh. Truly, I would have thought that there would be more, but maybe people have realized the site isn’t working.

I did look at all the available profiles and I’m going to tell you I think that they’re fakes. The girls are all too hot. Like definitely way too hot.

I know hot women are prostitutes on occasion, but I’m pretty damn sure that not every single one in a city is that attractive. If they are, maybe I need to move to Pittsburgh.

I will give them props, the girls all seem to have appropriate area codes with their phone numbers. I did not call any of the women, I wasn’t that curious, but if that was something I wanted to do, I would feel a little better that the area code was correct. I guess.

Something That Made Me Go Hmmm

The one positive I saw was the correct area codes in Pittsburgh, but I wondered if that was true for other cities. What I came across was actually a bit different.

Some of the girls were listed in multiple cities across the country and these cities were nowhere near each other. So, if I’m in Albuquerque and craving lady-time and I call a girl listed in Albuquerque, is that really the girl that will show up? Especially since she’s listed under Boston and Miami too.

I mean, I guess sex workers can multi-task, but I’m pretty sure they’re not going to be there ASAP.

You’ll also notice that there is very little activity on Adultlook. When you find a profile you like, you can see when the girls last logged into their profiles. You’ll also see that many of the girls have no reviews and the member activity is at a snail’s pace as well.

If Adult Look worked, wouldn’t there be more engagement on the site? I would think so.

Adultlook is crowded with links to other supposed legit sites. Like, they’re all across the top of the site and make you think that if you click on them you’ll find a Sugar Baby or Naughty Milfs. Trust me, you’re not going to find anything to that effect.

All of the categories at the top of the landing page of Adultlook are just advertisements looking to take you away to other sites. If I were you, I would totally avoid clicking any of those links, you’re just going to get annoyed.

Conclusion Regarding Use Of AdultLook

I don’t like Adultlook. I think it is nothing but a shady site looking to play off of the horniness of men. The site doesn’t have much interaction, there are not very many profiles where you would expect them to be, the women are listed in multiple cities, and there are very few reviews.

I honestly think that Adultlook exists just as a method of advertising other shady dating sites and for no other reason. However, if you find an actual sex worker on Adultlook and have an illegally good time, well I guess there are actually some legit ads if you dig deep enough.

I’m going to go all “Dad” on you here if you intend to keep using Adultlook. Be careful, use your brain, and if anything seems off, it probably is. Now go play but do it safely.

If you’re looking for the end all be all for hookups, then give any of these sites a shot and you’ll win for sure. Trust me on this one…