I’ve recently given the Whiplr dating app a shot. The idea popped in my head after trying the Bumble.com app because I wanted to compare them to one another. Here’s what I learned about the mobile app and my experience in doing so. My experience only covers use in the Manhattan area where I live, so I cannot vouch for other geolocations. Nevertheless, here’s what you need to know about this site. 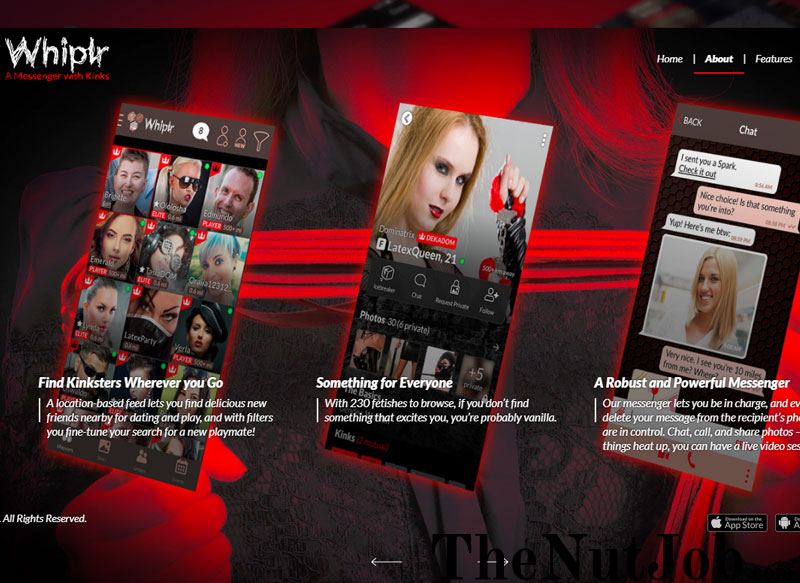 As a major sponsor for BDSM-centered events for over five years, Whiplr has definitely proven themselves as a trustworthy source of this sort of content. But have they conquered the dating app scene in the same way? Read on to find out.

Getting up and running on Whiplr is a pretty standard experience. After getting the app installed, you’ll have to provide an e-mail address, decide on a screen name, and enter a chosen password phrase.

From here, the journey continues to the profile building screen, where you’ll be entering seemingly basic info such as gender and orientation. But, like most things on Whiplr, there’s a lot lurking just beneath the surface. Even the selection of orientation such as “bisexual” can lead to clarification questions regarding the percentage of partners had.

While this can be pretty daunting to some folks, I urge you to stick with it here. This app basically bends over backward to provide as many options as possible to its users. Trust me when I say that this is a good thing, in the end.

A Lot Of Kinks

Something I immediately noticed about Whiplr when setting up a profile was all of the kink options to choose from. Seriously, this is about as diverse of a list of turn-ons as I’ve ever seen. Here’s a breakdown of the various offerings here:

Fashion – This is for those type of people who really, really get off on dressing up. There are often subcategories in this type of kinks, like “1920s Fashion”, for example. Cosplay is another example of this.

Objects – While I won’t get super detailed on this topic, it can relate to both everyday household objects, sex toys and pretty much anything in-between.

Behavior – This is for individuals who get off on acting out certain behaviors or situations. Role-playing falls underneath this category, as do dom/sub relationships.

Materials – Folks who love latex just a little too much are perfect for this option, which caters to the tactile-minded. If you get off on textiles and textures, this is the right choice for you.

Sounds – ASMR fans rejoice, there’s a category just for you! If you can feel yourself tingling from the whispered voice of another, or even enjoy the sounds of skin on plastic, you’ll probably find what you’re looking for here.

Shopping – So, I had to Google this particular kink and was surprised to learn that it’s fairly common! Shopping as a kink is where you either get off on buying things for another person, or get your pleasure from being shopped for.

Odors – One of the more obvious options on this list, it’s related to anything smell-based.

Other – If you somehow can’t find your subgroup based on the available categories, you can also opt into “Other” which will provide access to a broader category base.

Whiplr claims to have a total of 230 different fetishes to choose from, so I think it’s pretty likely that you’ll find something to suit your needs.

Another feature Whiplr provides is full control over your messages both sent and received. Unlike a lot of other dating apps, Whiplr will go so far as to enable you to delete your sent messages from the recipients’ own phone.

The messenger app also contains both a voice & video chat function, if you’re looking to make things a little steamier. However, it’s crucial for me to point out that these last two features are only available with Whiplr’s paid membership, which I cover below.

I enjoyed the security features I observed with Whiplr, as it seemed pretty well thought out. They offer a broad security approach that uses what are seemingly up-to-date encryption techniques, meaning that you can feel relatively assured that you’re protected.

They also include a novel pin protection that specifically locks the app on your phone. So, even in the event of getting your phone stolen, the apps data should remain relatively safe.

So, like a lot of other hookup apps, Whiplr uses third-party advertising to boost their site’s profitability. However, in the case of Whiplr, they have decided to err on the side of their user base, which is why they refuse to share any personal data on the site with advertisers and marketers. They even make it protocol to get permission from you to even show the ads in the first place.

I appreciate this, as it demonstrates Whiplr’s clear feelings of responsibility towards their users.

It’s pretty easy to get the Whiplr app, as they’ve made it available on both iOS and Android platforms. You can find it easily by using either platform’s “app store” to search for the name “Whiplr.”

While getting started on the app is free, there are some restrictions that come with the free accounts. You’ll be limited to 20 messages a day, in addition to missing out on the video and voice chat functions.

If you do decide to become what Whiplr refers to as a “Decadom,” you’ll have to choose one of the plans below:

There are way more pieces of functionality in Whiplr if you’ve paid for a subscription, including things like gifts, icebreakers, and an unlimited ability to block other users that may be bothering you, an ability that could definitely come in handy on an app dealing with sexual needs.

Now, I will say that I personally think paying for Fling’s premium subscription is a better choice, but the pricing is quite reasonable here.

Whiplr is a solid app, with a decent amount of features for the money. Even the free app provides you with enough interesting options to keep you coming back.