Well, well, well…hello there! What brings your presence here today? My guess is that you’re interested in the WellHello website. I’ve done my part to share my opinion of it with society. Here’s what you need to know. Keep an open mind when reading this and know that I put extra love and care into this review. 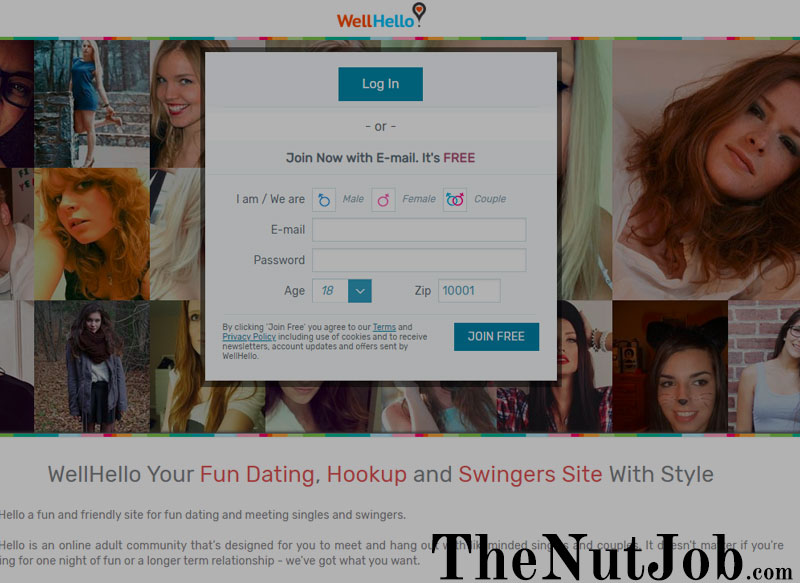 WellHello.com Is Something Else, Find Out What Below

I’ll start things off by saying that I really wanted to like WellHello.com, believe me, I did. I have even seen other reviews which have been written by other bloggers who have sung the praises of it. They love this social media-like singles and swinger dating site (this is much better). However, what I found while using WellHello.com was completely at on the other end of the spectrum. Nothing matches up with what they’ve written about it. Find out the scoop here.

The main page of WellHello.com is full of super-hot women and some guys that are strategically placed to make you want to join. A pretty face can do a lot of things, and the brains behind WellHello hope that it entices you to begin the money spending process.

The moment you join and create a profile, you’re going to be hit with some pretty sexy women sending you messages. These are women who will come on to you so strong, you will realize that they are probably fake messages. If you look a little closer at the messages you’re receiving, you’ll see that they are actually from “Love Hostesses.”

What Are Love Hostesses?

Love Hostesses are like Love Cupids on other sites. They are profiles created by the site and are either completely bot-driven or are run by paid employees. These messages serve no other purpose but to keep you engaged and interested and then paying money for an upgraded membership. And all of this is legal because they have it listed in the WellHello.com terms and conditions. It pays to read those, folks!

Messaging on WellHello.com is also something you will have to pay for. Yes, joining the site is free, but if you want to read anything you’re sent, or you see a woman you’re interested in, you must pay to talk. And how am I sure that the messages I did receive were fakes? Well, I got these messages even without a picture of myself on the site anywhere. Is a smoking-hot woman really going to send out provocative messages to a man she can’t even see? Highly doubtful.

I mean, would a guy send out a message to a girl he couldn’t see? No way! And not only that but when I upgraded my free membership to a paid trial membership, I started getting the same messages in the exact same order from the exact same women. Huge red-flag right there.

Is She Real Or Fake?

One great way to test if a woman is real is to chat her up and then suggest you move things to having a real conversation over the telephone. When I did that, they all either balked at the idea or didn’t respond as if they understood me, which means the profile was controlled by a bot. This is so deceitful and wrong, but still legal because it is listed in the terms that nobody ever bothers to read. Another thing to think about is the fact that you’re never going on a date with a bot.

Hello! Stop Trying To Sell To Me

Another thing I hated about WellHello.com is that they are really pushing third-party sites. Most of the links that you’ll see on WellHello will take you to paid cams, fake dating sites, and fake questionnaires. You’re also going to be smacked in the face by the multiple huge banner ads all over the site. They are practically begging you to click on these ads which mean the site is getting paid for any traffic they get to these other third-party companies.

Breaking the (I Mean “Your”) Bank

So, not only is WellHello.com full of fake profiles and obnoxious advertising, they want you to pay for it! WellHello isn’t cheap and if you want to join, you can do a $1.00, 24-hour trial or you can opt in for the $29.95 monthly membership. But it won’t stop there. Depending on which membership you use, you will also be charged for other sites as well.

For example, the one-day trial will also entitle you to a free trial of another site billed as YOMEM.com. This will auto-renew at $39.95 monthly.

Oh, and there will also be another $39.95 monthly fee for VipWebPassport and $39.99 monthly for another site called Cheeky Dates. You cannot opt out of these offers, you must actually cancel them and if you don’t even know that you’re joining them, how will you cancel them?

Now if you went for the monthly membership to WellHello.com, that comes with a totally different set of charges. Your credit card will be charged by CH4MS.com for $29.95. And if they aren’t able to charge that card, they charge you a $2.00 convenience charge! There will also be a charge for VIPWebPassport.com at $39.95 monthly and an auto-renewing membership to PornVault.com also at $39.95 a month.

Finally, WellHello.com has what they call the $9.99 monthly option. All that means is that they will charge you for an entire year upfront. The entire payment scale and process is all over the place with WellHello and it just aims to confuse you into spending way too much on a site that is completely worthless. I would never recommend anyone use WellHello.com for anything. The site is just full of fakes and there isn’t any chance you’re going to actually get a hookup.

I have reason to believe that this network is all about profiting and not actually helping you meet people. That’s simply my personal opinion, nothing more. While I can’t prevent you from joining, I can tell you that it’s in your best interest to not waste time using this network. Trust me I know what the average woman wants in a man and what men want in a woman. I can tell you right now, men don’t want fake women, they want booty and boobs to play with. That’s all I’ve got to say about that.