Most guys I know like to spend at least a little time and money at strip clubs and the ones that say they don’t are lying. The Ultimate Strip Club List, or Tuscl.net, is a site that is supposed to be used as a method to rank and leave reviews of the strip clubs across the world. This sounds awesome on paper, but in reality, Tuscl.net leaves a lot to be desired.

Guess who’s not leaving you high and dry? ME. I’m here today to share my experience using Tuscl and why you might be better or not using it. 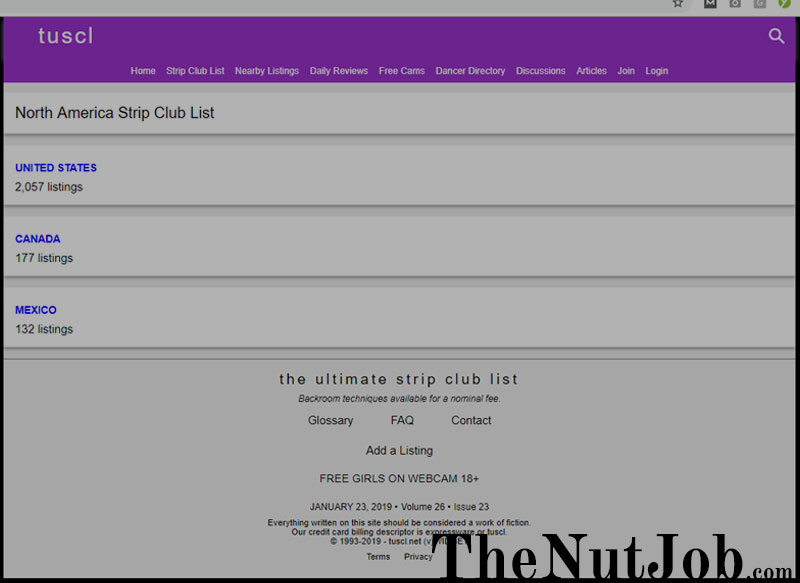 Tuscl Rundown Just For You

If you do decide to take the plunge and join Tuscl.net, you’re probably going to get excited by all the categories available to you. Like seeing cam girls? They have a page for that. Maybe you’re looking to hook up with a hottie. If so, there’s a page for those listings too.

Yep, the categories that Tuscl has listed do not legitimately exist. There are links to these categories, but you will be taken from Tuscl and plopped right onto a third-party site that is looking to make money off of you but won’t give you anything but headaches in return.

Now, if you are planning on using Tuscl.net for what it was supposed to be created for, you’re going to be disappointed there too. The reviews for the strip clubs honestly look like they are written by either strip club employees or the owners of those clubs pay Tuscl.net to write them.

I don’t think I saw one review that didn’t appear to be made up. Oh, and some of the clubs are actually battling with other clubs through reviews, which is ridiculous and juvenile and a sure way to tell that reviews are fakes.

The final reason I don’t much care for Tuscl.net is because they are hardcore pushing escort sites and other illegal sites internationally. There is no reason to join other sites like that as you are essentially admitting guilt just by creating an account and if the site is seized by any legal authorities, they will have all your information! That is just too much risk for a piece of tail if you ask me.

Conclusion: This Site Is Useless, Sorry To Say

The Ultimate Strip Club List really isn’t all that it claims to be. Between the bickering clubs at odds, the fake reviews, the shady advertisements for escort sites, and the links to other shady services, Tuscl.net is a site I would totally avoid. If you want to hook up with escorts then take your ass down to Costa Rica for the weekend. Don’t fool around with that nonsense in the U.S. or you’ll be sorry. Instead, take your membership fees and put them into the g-string of a sexy hottie and don’t waste one second of your time on this website.