If you’re someone that enjoys visiting more of the “special” kinds of spas and massage parlors, you might be tempted to try out Spahunters. This is supposed to be a listing site with reviews on each of the spas that they advertise. This may sound really awesome, but I’ve found that looks can definitely be deceiving on many of the sites that cater to illegal activities such as these.

Now, before you give me crap about being a rat or a punk, I’m not calling out anyone here necessarily. However, what I am doing is making it known that this site is shady and one that you must avoid. As for the massage therapists and spas, I couldn’t care less because they’re garbage. I write what I want because I own TheNutJob.com and that’s what I do and who I am! Check out my review for the straight up facts from a no-nonsense New York City guy. 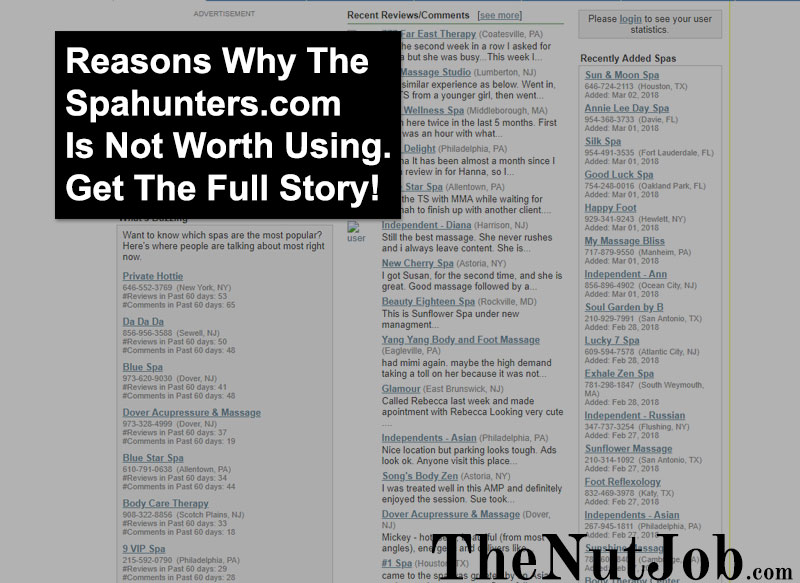 I am going to avoid all the common-sense stuff about how using a spa or massage parlor for paid sexual encounters is illegal in the United States. Instead, I want to present to you why I think that using Spa Hunters for any reliable and accurate reviews is a bad idea. Deciding to go forth with any of the illegal stuff is on you, but don’t say I didn’t warn you.

Signing up for Spahunters.com is pretty easy. To be a registered user you’ll just need your email address, a username, password, and a retrieval question if you should forget that password. If you make a username with anything explicit, it will be deleted and you can’t make multiple users accounts either, just a heads-up.

When you visit this site, you’ll see it’s pretty plain, almost like Craigslist. There is a boatload of outside advertisers with banners and gifs, mostly because the cost of advertising on Spahunters is very cheap, at about $15.00 a week.

The most useful aspects of the Spahunters site would be their “What’s Buzzing” section. This is where people are able to leave reviews on the spas that are the current most popular spas. There is also a section for Recent Reviews/Comments for active spas and site comments. You will also find a heading for recently added spas with their contact information and when they were added to Spahunters. There are approximately two spas added to the site every day.

The massage listings page allows you to pick from different states, and even narrowing it down by city and area code. The number of listings will vary by state, there are just places you’re not going to find anything listed so you’ll need to look for your illegal activities elsewhere.

Message boards seem to be hopping with people leaving questions and comments from all over the country. There are various topics such as: Site Use and Feedback, New Member Talk, Spas in Your Area, and General Discussions. Sounds pretty good, unless you read in the Terms of Service that Spahunters says that these discussions are for entertainment purposes only and that they do not guarantee the accuracy of anything on the site, nor are they to be held liable. Kind of shady if you ask me.

Finally, the site admins will delete any ads that mention any legal issues a spa might have had. If you’re a site that is catering to men (and some women, I’m sure) and trying to provide them with accurate information, how is deleting negative reviews and posts being accurate? And if I was going to visit a spa or massage parlor, I would certainly want to know if they’ve been raided before because then they are already on law enforcement’s radar.

Speaking of law enforcement, don’t be foolish enough to think that they don’t know about this or the spas and parlors that are listed. The police will often use a site like this one to conduct their stings and lure unsuspecting men straight to legal troubles.

Trust me, you can find sex for free out there with willing partners who aren’t wanting to get paid. It may take you a bit of poking around, but it is possible. If you can avoid it, steer far away from sites like Spahunters.com as there is nothing good that can come from using an illegal sex spa or parlor. In fact, the only thing that I can think of that happens at these places is getting arrested or a disease. Stay away from all the shady New York escorts selling services in massage parlors, please!