When it comes to sex and games, “homie don’t play that!” In other words, I hate games but, I am a bit nutty, which is why I’m typically using the most well-respected hookup sites on the Internet these days. During one of my searches, I came across a site called SkipTheGames.com. As you can only imagine, I was thoroughly intrigued given the branding. Well, it’s one of those cases where looks really can be deceiving. I’ve covered everything below that you need to know… 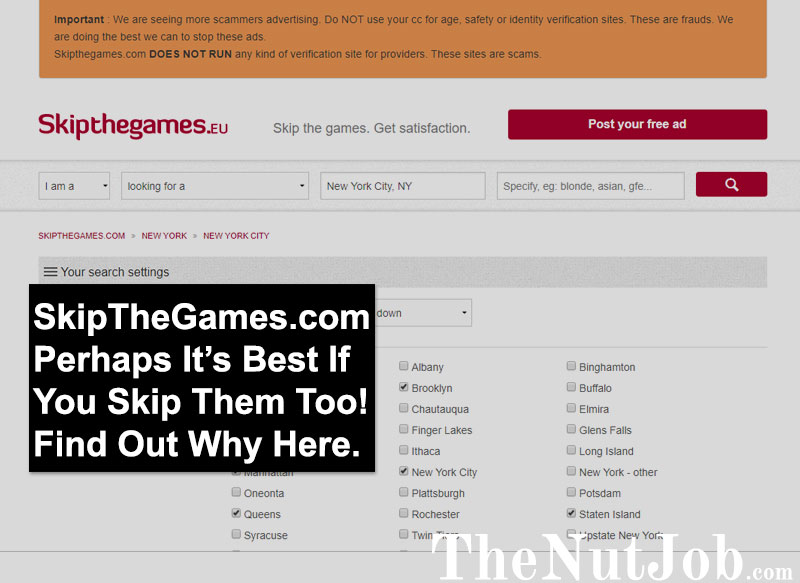 “Skip The Games” Isn’t What You Think

How many times have you joined an adult dating site and the women are all looking to make you their best buddy before they’ll even think about showing you their goods? Or, have you spent a lot of time talking up a hottie only to find out that they had no intention of meeting you, they just wanted something to occupy them while they were bored?

When you first get onto SkipTheGames.com, you’ll see that it’s quite boring to look at. It has a very sedate look about it, almost like boring, old Craigslist. You can choose from anywhere in the world to find your escort, including places where hiring someone for sexual acts is completely illegal, such as the United States.

You can narrow it down by state, then city, and what awaits you is a collage of the various people you can hire for an hour or more. In my area, I had both men, women, and the occasional shemale posting in all shapes, sizes, and colors. Sounds pretty great, doesn’t it?

Well, let me promise you that it isn’t. The terms of service for SkipTheGames.com says that they will record anything and everything you do while using their site. Nothing is considered confidential. That is probably why law enforcement will use sites like these for undercover stings, they can easily catch you at what you’re up to.

I’m also not 100% convinced that these are legitimate ads posted by real people. Anyone can post anything online and just because you’re talking to someone doesn’t mean that booty is the booty that will show up on your doorstep. In fact, you have no clue who is going to show up when you use any escort dating site, they could have ill intentions for you and you can end up beat up, robbed, or even worse.

Oh, and don’t think the site will stand behind you if something bad should happen. In those terms of service, SkipTheGames.com essentially say that you are taking all risk and responsibility upon yourself when you do anything on their site. There is absolutely no guarantee for anything when you’re using SkipTheGames.

Another aspect that I really dislike about SkipTheGames.com is the fact that they send you a boatload of promotional information. Sure, the site doesn’t have all the third-party banner ads that other sites do, but I don’t want to be annoyed by a huge spam influx either.

Popular Cities and Towns of SkipTheGames

I don’t always share information on towns and cities where people are looking for escorts, but I really wanted to do so for Skip The Games. Why? Well, there are some locations that seem to be getting their use of STG more so than others. I want to expose those locations so that you don’t make any mistakes. Remember, if your city is listed below, that doesn’t mean you should use this. It just means that people are dumb enough to be trying to use it and they have a greater chance of getting in legal trouble.

If you do decide to waste your time on SkipTheGames, you’ll eventually want to find something else. Trust me, you will. All I can say is this: good luck with that. Those terms of service state that they don’t honor any refunds or cancellations with the girls. If you don’t believe me, please, PLEASE read the terms of service for not only this site, but for any other dating site you use. Everything is usually covered in there and you can really tell a lot about a site by its terms.

I won’t harp on the fact that purchasing an escort is illegal (yes, in NYC too). You’re going to do what you want to do since you’re a grown-ass man. But, using SkipTheGames.com is not the way to go. The ads are dicey, almost too perfect, and using the site itself just puts you at risk for getting busted. You know all the risks, now use that brain of yours to find other, legitimate sites where you won’t risk getting beaten up, robbed, killed, arrested, or even a disease.