While many readers probably haven’t heard of DateHookUp, they’ve almost certainly heard of its sister site, Match.com. Both of these sites, as well as a slew of others, are owned by InterActiveCorp, an organization that has been creating content on the web since its very early days.

Please note: I’m not typically accustomed to using mainstream sites like this one and if you’re simply looking for a one night stand, then this isn’t the site for you. However, I never say no, so why the hell not… 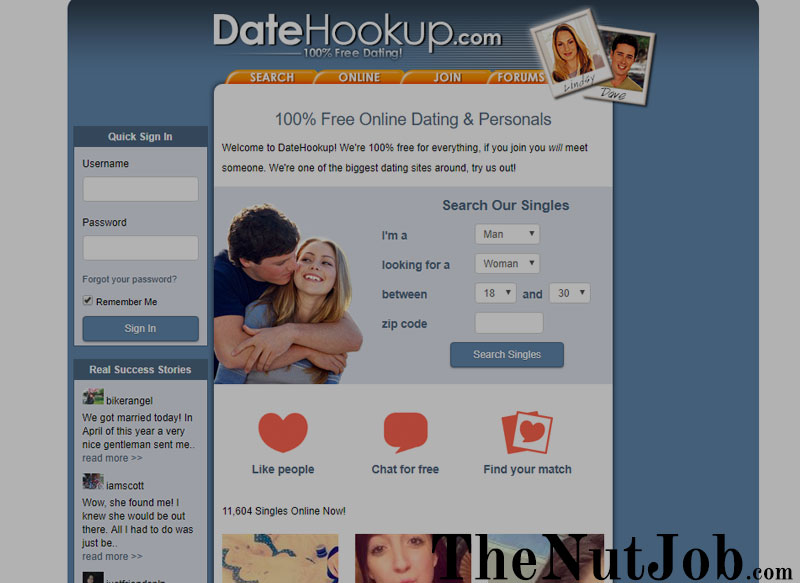 My DateHookup Experience (Keep Reading Below)

Now that you know how I role aka live the single guy lifestyle with zero intentions of ever settling down, then you know that I’m simply testing this for the masses, not for my own enjoyment ~ just want to make that clear!

Registering As A User

Signing up was super easy, with DateHookUp only asking for an email along with a couple of baseline questions like age, gender, and where you live. I was done with signup and browsing the online profiles in under 3 minutes, which normally might be a little troubling. However, as DateHookUp is designed specifically for mainstream, the which isn’t necessarily the ability to hop right in and meet your date for the evening (which is something I appreciate) but it’s good.

The only downside to this lightning-quick signup is that it can often translate into a plethora of fake profiles. Luckily, DateHookUp has completely overhauled their security, something I go into later in this article.

Do they have fake articles? It’s possible, but let me cover that down below before jumping to conclusions.

Jumping in, I immediately felt as if DateHookup.com was putting out a Facebook-esque vibe. The user interface is very similar to that social platform, with a list of drop-down menus showing you the various free and paid options available.

The site has adopted a modern look and feel, which I found to be pretty inviting. I’m not sure who DateHookUp contracted to update their layout, but the fluid animations and seamless transitions between pages was something that this avid web sleuth wholly enjoyed.

Another nice touch here is that they’ve added chat rooms (similar to Camsoda.com chats). While this may seem like a dated feature for some (no pun intended), I liked the idea of dropping into what they’ve deemed their “virtual bar” to mingle with people right away, no searching required.

As I mentioned earlier, DateHookUp offers some stellar functionality regarding your data’s security. They use 128-bit, end-to-end encryption when storing things like passwords and credit card data, in addition to a 2-factor authentication system to keep would-be hackers out of your dashboard.

Now, I admittedly had to Google some of those words to understand what they meant, but the general idea here is that this site offers 21st-century security for a batch of services that similar sites often don’t.

It’s nice to come across a company that wants to bring these sort of sexual habits into the mainstream by treating its users with respect, and predicting their needs before something negative happens, instead of afterward.

The profiles here were unfortunately quite average. The site seems to have attempted to tackle their issues with spam profiles by increasing their security, but this has had mixed results.

The signup process still isn’t rigorous enough to prevent the occasional bot, and since the website offers most of its functionality free of charge, the bulk of its users don’t benefit from most of shiny, new security that DateHookUp has added.

Another problem with the profiles is that they’re relatively vague. Even the additional information guests can fill out reflects little about their personalities or interests, aside from sex. I was a little frustrated that guests aren’t provided the option to show something real about themselves.

Once I was able to chat with someone, I was pretty impressed with the functionality here. The chat features are well designed and offer the ability to send photos and videos in addition to regular old text.

Dating From Your Device

Last year, DateHookUp released a mobile version of its website, to mixed reviews. Since then, they’ve been pouring hundreds of thousands of dollars into its continued development, and the results have been extremely promising. In addition to the normal web functions offered on here, the app adds a Tinder-like swiping capability, and the ability to upload photos and videos to your profile “on the fly.”

My favorite part about the app surprisingly had nothing to do with the newly added features. Instead, I was impressed by the chat rooms offered up. While the desktop site online offers only a single group room, the DateHookup app severely expands this functionality, opening up over 50 additional rooms.

I certainly saw some bugs in the system, but overall I was generally “okay” with DateHookUp. While their reputation hasn’t always been the greatest, my experiences on the site were mostly neutral. After checking out the more recent reviews that have come out from other users, it also seems to me that the site is making a huge push towards providing a consistent, quality user experience to go along with their eye-catching new site design.

However, that won’t get me dropping all my faves anytime soon, that’s for damn sure!

The chat functionality was novel and provided a new twist on the mainstream dating scene.

In my opinion, with an overhaul to the profile design, DateHookUp could be a better and more casual site eventually in 2019. However, it’s just not there yet. If you’re looking for a way to meet local singles, I’d suggest reading this and signing up here before attempting to use this site.