There are some sites out there that just don’t allow me to write much about. It’s because they’re that fake that it’s absolutely ridiculous to think that they work. Today I’m sharing a site with you called Craigshookup.

Before you get all excited, it’s not what you think. As you know, if you were ever glued to the Craigslist Personals section for your casual dating or hookups, you might be kind of bummed that they’ve been closed down since April of 2018.

Sure, many people found hookups using those personals and they really have left a hole in the casual dating community. However, do not be fooled by the Craigslist-wannabe, Craigshookup.com, or the even worse site, Craigshookup.net, as they aren’t anything like their namesakes. 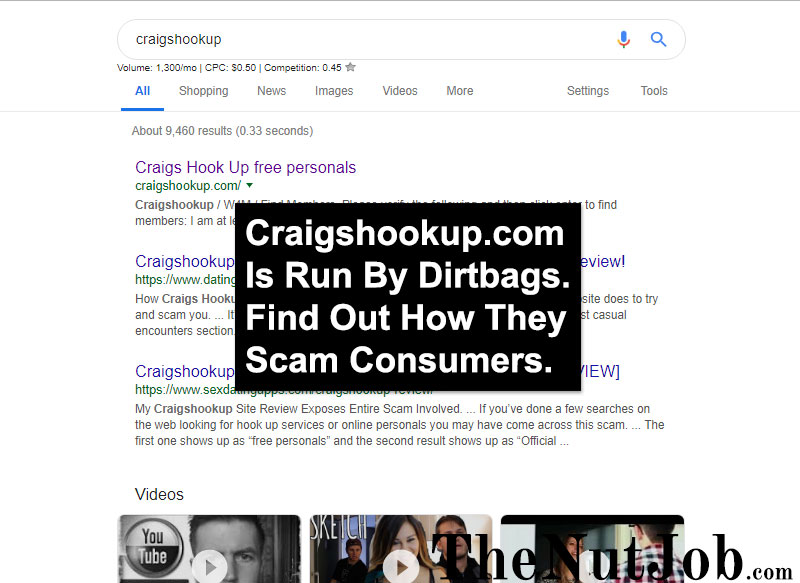 Craigshookup.com tries to portray itself as the actual closed-down personals section of Craigslist. Looking at the site design and the way things are worded and written out, it honestly looks like you’ve landed on Craigslist.

What actually happens when you try to click on any of the ads on Craigshookup.com is that you’re redirected to another site, which means the ads you’re checking out aren’t legit at all. These are sites managed by a parent company for shady dating sites like Affairhookups.com and Milfhookups.com, so guess who is running Craigshookup.com?

I know, I know, you’re going to tell me that there are so many categories with high numbers of ads listed. They can’t all possibly be fakes, can they?

All Lure, No Love

Now, if you’ve done any web searches about Craigshookup.com, you might have stumbled across another wannabe, Craigshookup.net. So, what is their deal? It’s pretty much the same story, although Craigshookup.net tries to present itself as a blog dedicated to adult dating instead of Craigslist-copycat ads.

Clicking on any link will once again redirect you to another site, although this time you get to see a hot blonde with her boobs out. She’s just there to try and lure you into joining another fake dating site that will be full of fake profiles, high membership fees, and zero results for your hookup wants.

Casual dating is hard enough, you don’t need sites like this that are playing off your emotions to try and get you to join yet more fake sites. Craigshookup.com and Craigshookup.net will continue to get away with their deceitful practices as long as people keep falling for them. So stop falling for them!

If you are smart, you will completely avoid any site that has been named after other popular sites that have had their personals ads shut down. It never leads to anything good and you’re never going to find a partner. Plus, there are just too many good sites and apps as well out there if you want a hookup, so trust me, Craighookup.com or Craigshookup.net are not worth it.